Activity 3: Record and Add a Sound to EarSketch

Extension A: Invite a Guest

Extension B: Exploring Indigenous Music as a Space of Resistance

Before we start coding, let us learn a bit about Indigenous Traditional Knowledges and their importance.

We say knowledges with an s because there are many types of knowledge that we will be talking about.

Learning about Indigenous Traditional Knowledges is important for racial equity.

Note: There is more background information in the Resources section. 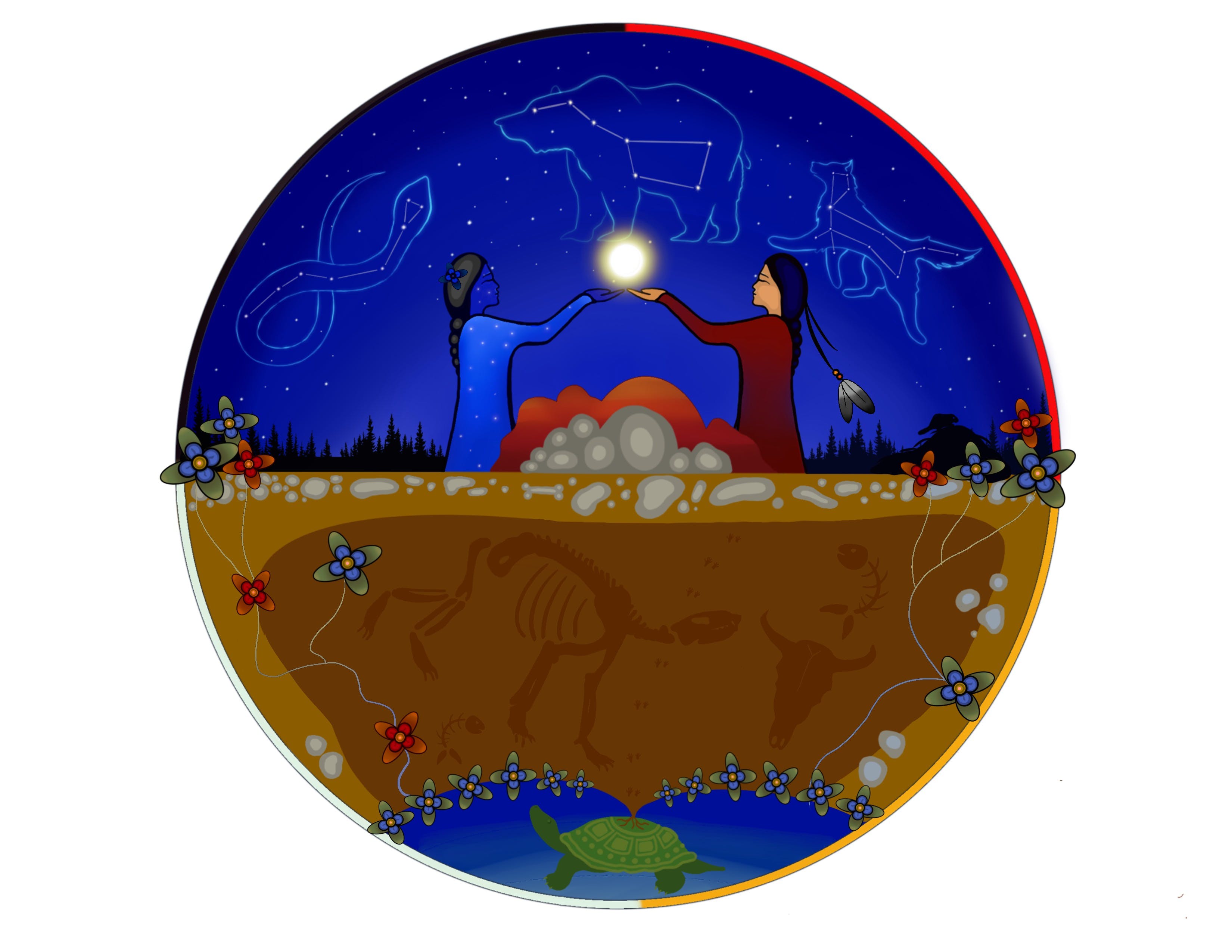 Which Indigenous Traditional Knowledge System resonates with you the most and why?

Activity 3: Record and Add a Sound to EarSketch (10 minutes + homework)

You may wish to add your own sound (either lyrics you say or sing) or something you've recorded or get from another copyright-free source.

In this activity, you will record and add lyrics. You might add a lyric from Jayli's song (and credit her with a #comment in your script) OR you may record an original lyric that you were inspired to write by her song.

1. Open your Your Voice is Power [Your Initials] script.

2. Select the Add Sound button in the Sound browser. 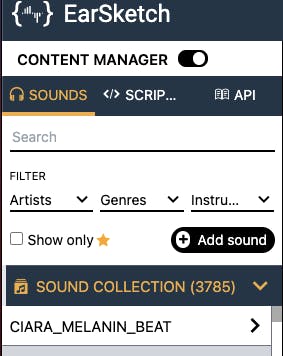 3. This action will open a pop up window, with the "Upload Sound" tab open. 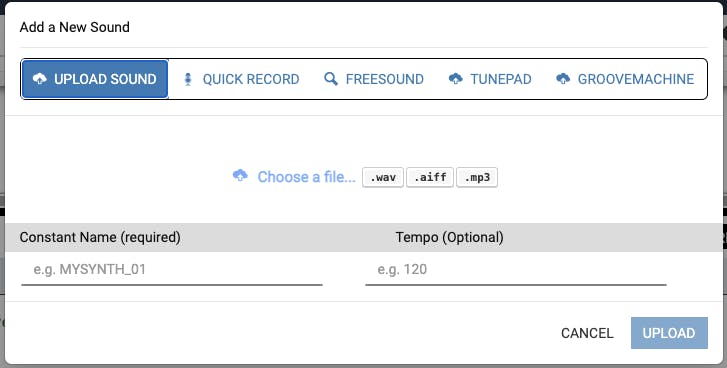 7. Type a name for your recording where it says Constant Name (required). 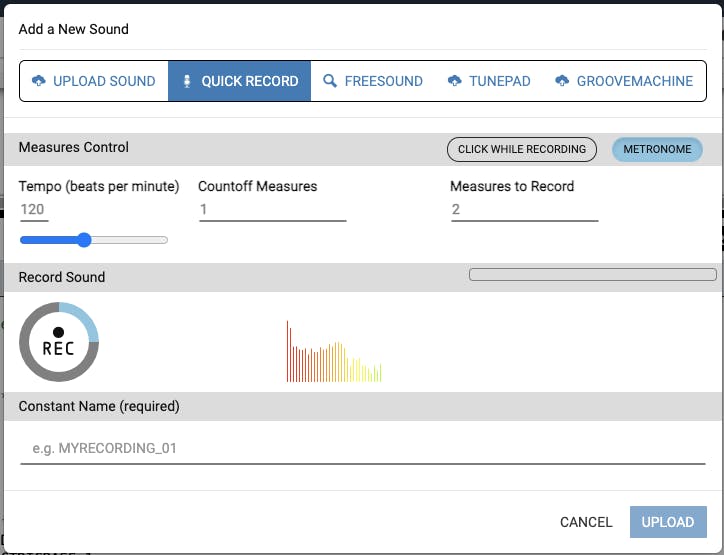 8. FILTER your SOUNDS by Artists. You will see your login name there as an artist!

NOTE: Make sure you CLEAR your Instruments first! 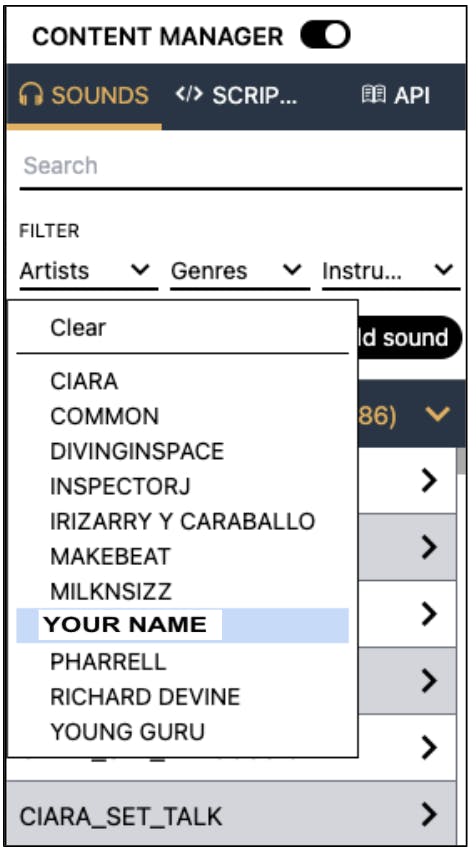 9. Select Your Name. You will see your sound clip.

10. You can now add your sound clip to the #SOUNDBANK

- Assign it a variable

- Change the variable name in one of the fitMedia() functions 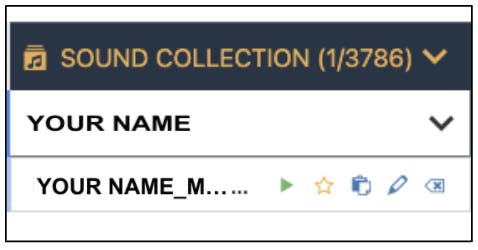 This activity is drawn from 26.6: Defining Measures in the EarSketch Curriculum

Often we talk about building the song in blocks of 4 and 8. Why? In music, beats are grouped into groups of 4. Each group of 4 beats is called a measure (or note). Each beat is a quarter note in a piece of music. One measure has 4 quarter notes or 4 beats.

In EarSketch, every measure contains 4 steady beats. After you run a script in EarSketch, you can switch the metronome on or off to listen to the steady pulse of your song as it plays!

In an earlier module, we looked at SONG STRUCTURE with patterns such as ABAB. It’s time to transform your code into a song. How do you do this without writing lines and lines of code? Imagine you want to code a 2-minute song — you might end up with 150 lines of code! Woah, that is exhausting to think about!

We will use custom functions to define our song sections. This is a series of steps that are summarized in one command or function. Chorus or Verse will have a series of sound clips that it plays for an assigned time.

Watch this video on Song Structure to get a visual overview of the process.

Look at these two examples of code or in this EarSketch Tutorial in the Curriculum: 27.6: Writing Custom Functions Both sets of code are correct, they have an ABAB form and will play the same song.

Which code will be easier to edit if you want to make a change?

If you picked Example #2, you are correct! Code Example #1 (without custom functions) is much longer and more complex. (In fairness, the advantages are more obvious if the music is more complex! See a more complex example in 27.5: Introduction to Custom Functions)

Part of learning to be a programmer is learning how to write efficient and logical code.

What is a Custom Function?

Custom Function definition: Written by the programmer to accomplish a specific task, often a task that must be done more than once. Functions take many smaller, repetitive tasks and assign them to a custom name.

Let's Run and Play that Code!

Note: In this example code, the chorus is the same each time it plays. We expect this. But, in a real song, the verse will likely not be the same. We might have verse1 and verse2.

What's with the START and END Variables?

Functions in EarSketch need inputs or parameters (arguments). We use start and end to 'hold the place' for the measure to be used when we 'call' our function. That makes it so easy to change the timings as your creativity unfolds!

This custom function defines verse. It tells the computer to play a drum and a bass sound clip for a certain number of measures. 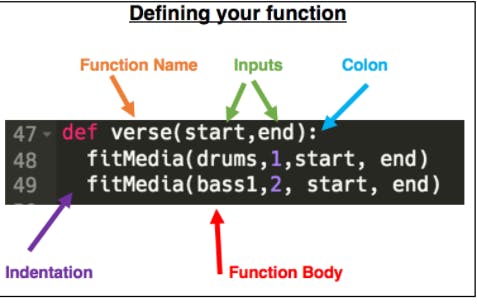 You already used functions in EarSketch, such as fitMedia()—but now you will actually create your own functions. THAT is real programming!

Custom functions are written by the programmer to accomplish a specific repeatable task with a single 'command' that executes multiple lines of code.

Functions are named by the programmer, can have numerous inputs (parameters/arguments), and can be called anywhere in a script—assuming you have defined that function before you try to call it!

Functions not only make your code shorter, but it also allows you to create complex code that can be easily repeated without error.

Seymour Papert, the creator of the first programming language for students called these abstractions — mind-sized bites.

Think about the simple concept of "brushing your teeth". Brushing your teeth is actually a series of actions such as putting toothpaste on the brush, wetting the toothbrush etc. However, when you tell someone to brush their teeth, you don’t include all those steps. The steps are understood as part of the "Brush your Teeth" command. This is an example of an abstraction — a mind-sized bite!

Inside the definition of verse() are instructions, or the body of the function. These instructions are indented. In this example, we have selected sound clips and tracks and used fitMedia(), but will use our inputs start and end to note the timing of the sound clips. fitMedia() was used in the function body. (However, you can also include makeBeat(), loops, setEffect() and other functions/variables in the API. You can research that later!)

The function definition does not automatically execute the instructions in the function body. In order to use the function, we will “call” it.

It's okay if you are a little confused! Custom functions are the most complicated coding concept you've seen! You might want to start by just creating hard-coded functions for just your verse or just your chorus, and then if you get that working, challenge yourself to add the start and end, but know that the hard-coded option is acceptable for the competition.

This activity is similar to 27.7 Coding Custom Functions in EarSketch in the EarSketch curriculum.

Ok. First of all, let's think about song structure!

Let's pretend it's the same as the example. Except, you may have an #intro from before. So we'll put that in! You will come back to that later.

Of course, you may 'kick it up a notch' later with bridges, transitions, outro, and so on. But, we'll start simply.

So, this basically means that we can define functions for each of those song parts. Then all we need to type in our CODE EDITOR (along with start and end numbers—if not 'hard-coded) is:

Mind-sized bites those are!! :-) It's certainly easier to read than ALL the lines of code for each part! And, if we want to change something inside any one of those song parts, we can do that, but it won't change the function calls! That can remain the same.

Coding Custom Functions for your CHORUS

Repeat the instructions above (Coding Custom Functions for a CHORUS) to write a new custom function for VERSE.

This would result in Function Calls like the following:

Important Note: if you had the fitMedia() functions staggered, you will have to modify the parameters! See Module 7!

Continue to add custom functions to lengthen your songs and add more variety. You can add a intro, outro, more verses, or a bridge to your song. Think about adding some transitions to your song between the verse and chorus. Transitions can be a one-measure sound clip using a fitMedia() function. It does not need to be included in a custom function. Check out the EarSketch Chapter on transitions. 6.3 Transition Strategies

Congratulations, you have transformed your beats into a song. Your remix is almost complete.