Activity 1: The History of Hip-Hop

As you are learning, a major barrier for African American youth in the past when Hip-Hop was first created, and still in the present —and for all people of colour—is racism.

I’m sure you have all learned about racism or even experienced it or seen it in the past.

How would you define racism? Work with a partner (or breakout groups) to share what you think racism is and create your own definition of racism.

Take a minute right now to write down in your Student Notebook what you think racism is.

Here is our definition that may express it well.

"Racism is the subtle and overt mistreatment, hurt, and harm (discrimination) against individuals or members of a group based on the colour of their skin. It manifests in a variety of ways and impacts everyone differently."

*Optional: If you have time:

Next, we are diving into the different types (or layers) of racism and how they show up in everyday life.

There are 3 types of racism: 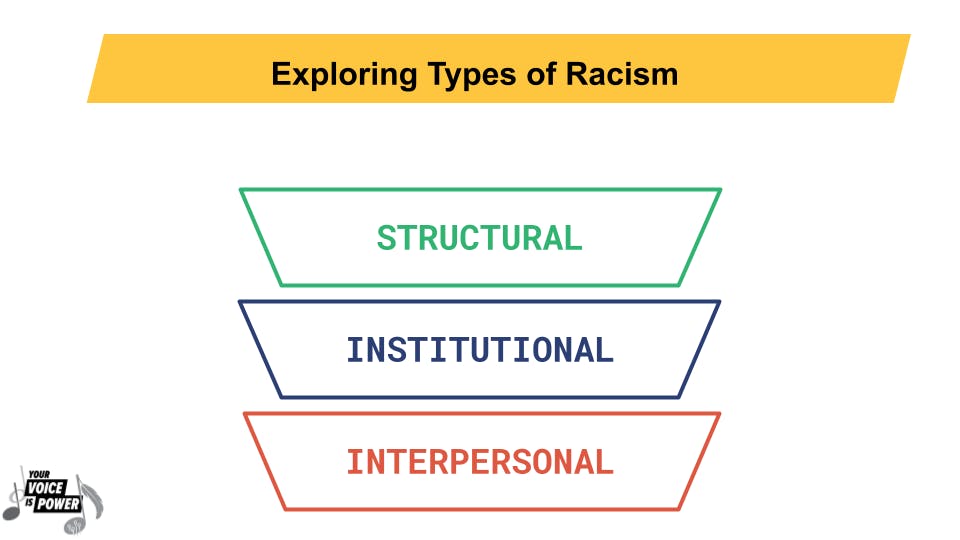 Interpersonal racism is the racial bias that occurs when individuals interact with others, and their personal racial beliefs affect their interactions. It is the exercise of personal prejudice that demeans, hurts, or harms communities of colour.

An example of interpersonal racism is the use of a racial slur or an insensitive racial comment.

Can you name another example of interpersonal racism?

Institutional racism occurs within institutions and systems of power. It describes the unfair policies and discriminatory practices of particular institutions (schools, workplaces, etc.) that routinely produce racially inequitable outcomes for people of colour and advantages for white people. Individuals within institutions take on the institution’s power when they reinforce racial inequities.

An example of institutional racism that African Americans endure is a school’s policy to suspend Black girls who wear braids in their hair.

Can you name another example of institutional racism?

“Structural/systemic racism is a racial bias among institutions and across society. This involves the cumulative and compounding effects of an array of societal factors, including the history, culture, ideology, and interactions of institutions and policies that systematically privilege white people and disadvantage people of colour.

An example of structural racism African Americans had to ensure was redlining, a system once used by banks and the real estate industry that outlined the neighbourhoods where people of colour lived in red ink. If you lived inside the red lines, banks were less likely to give you loans or investments."

Can name another example of structural racism?

When the song is complete, we will discuss the message and the types of injustices described.

As you can see, Hip-Hop music has been a tool for African American youth to express and describe various injustices around them.

You may have heard the word script in your English Language Arts or Theatre class.

A script is a written text with instructions on what to say in a play/TV show/movie.

A script in coding is similar. It is a series of instructions carried out in a specific order by a computer.

Your script in EarSketch is your list of instructions for the computer to play your music, just like a script gives actors/actresses instructions on what to say when they perform. 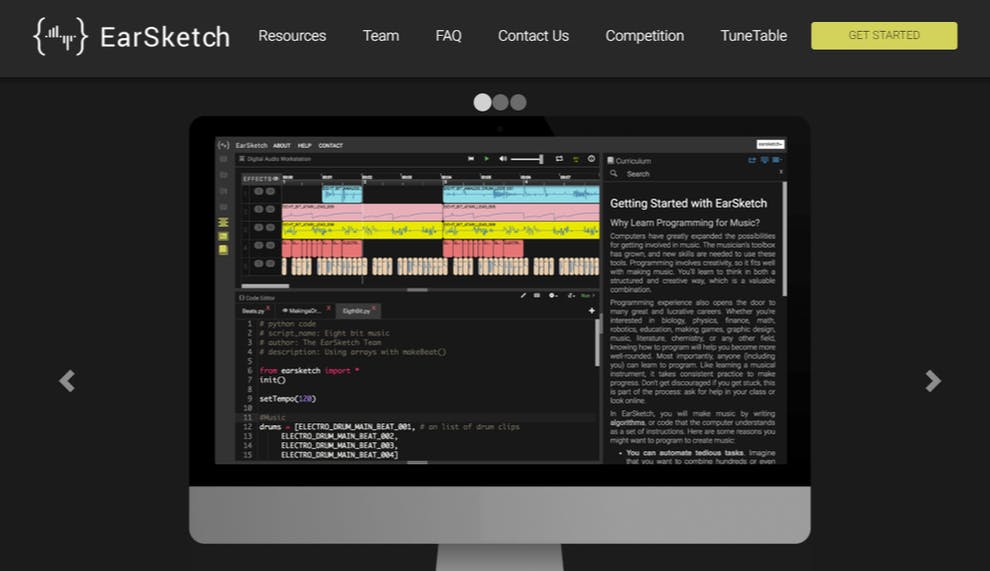 Let’s learn how to create a script in EarSketch! Follow along with me. 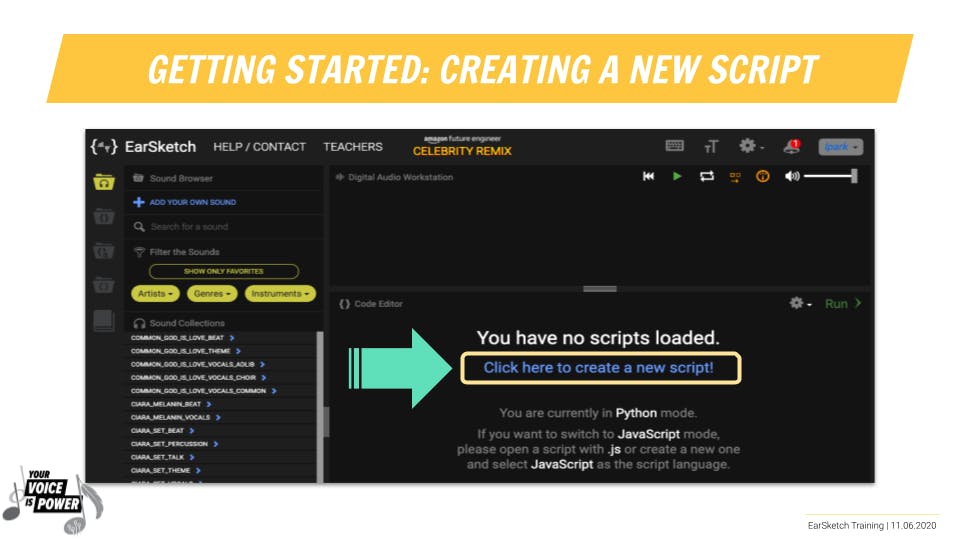 The CODE EDITOR is in the center of your workspace window.

Note: The sample code and curriculum are in Python.

Many of the largest Internet companies like Google have used Python for web development. 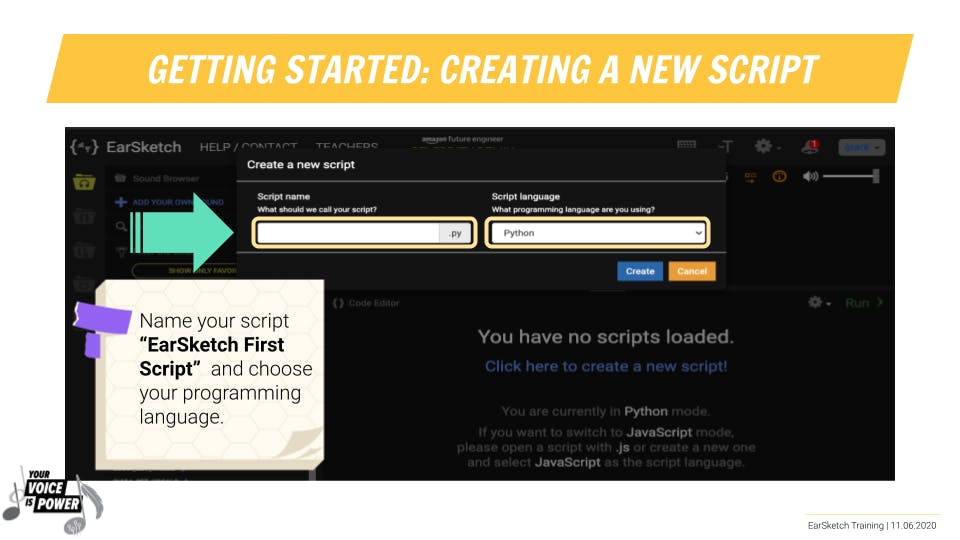 Let's go over some important sections in your script. (See 24.7 Creating a Basic Script in EarSketch curriculum.)

Comments Section: Notes about your code.

Setup Section: This code tells the DAW how to prepare to make music.

Music Section: The most important section. All details of your code and composition go here.

We will be diving into each of these sections throughout the Your Voice is Power remix competition.

This is just an opportunity to familiarize yourself with the parts of your script. 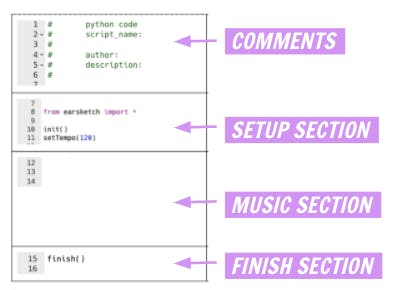 EarSketch automatically saves all scripts in the scripts browser.

The scripts browser is in the left menu of the CONTENT MANAGER:  </> SCRIPTS

Select the icon right now, and you will see the name of today’s script at the top of the list in the scripts browser. 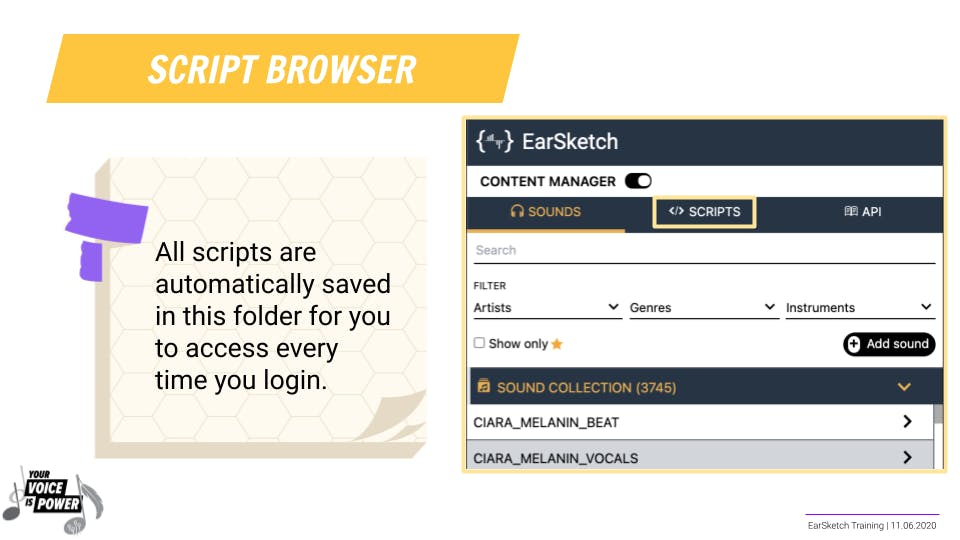 Comments are signaled by the pound/hashtag sign (#) and are in gray. Comments are not executed when you run your script.

Use comments to make notes in your code, to explain the purpose or message of your code, or to give attribution/credit to other creators.

They can also be used to disable lines of code so they are ignored by the computer when the code is run. A good debugging strategy!

See how the comments in this sample code on the image explain the organization of the song to the viewer (intro, verse, chorus, outro, etc.).

You will need to include comments in the code you submit for the challenge. It will help the judges understand: 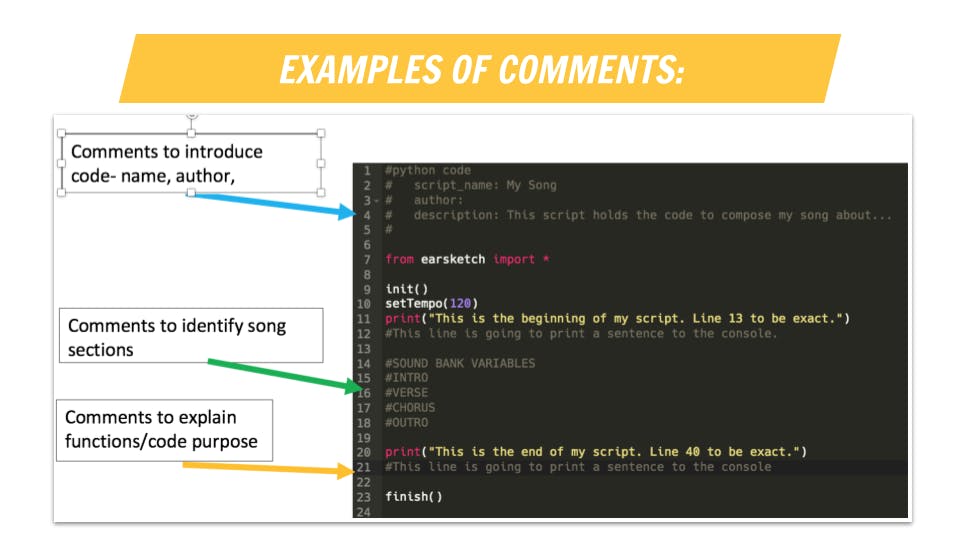 Add the bolded text with your name and your script name into your EarSketch First Script. Type the print line too. (This is a different kind of 'commenting'.)

# script_name: YOUR VOICE IS POWER

# author: STUDENT NAME
# description: This script holds the code to compose my song about...

Print "This is a great opportunity to share my personal experiences"

Note: there is no # for the print line because it is NOT a comment. It is code to be executed. But, there are quotation marks!

Extension B has suggestions for Free Time to explore.